THE END OF THE WORLD (as we know it)

So this is how the world (as we know it) is gonna end (probably).

Ladies and getleman, soon will come a second cold war, and a third world war. Yes, indeed, and probably everything is going to change, and it is going to SUCK. So yeah, what's going to happen, you ask? Well, lemme let you know right now:

It starts when the polar bears in Antarctica, due to the continuing affects of global warming, will have a massive migration into Russia, where they will wreak havok. Eventually, a full-fledged military campaign is going to take place in an attempt to fight back the polar bears, but alas, it was doomed to fail. As the polar bears march further south, threatening potentially reach China, and possibly Europe. The UN will launch a joint-effort of all European nations, along with America, China, and Japan, to stop the impending polar bear takeover. The campaign will inevitably push back the polar bears, but it will not stop them completely. It does, however, give Germany enough time to hastily create a new Berlin wall in an attempt to keep the polar bears out of Europe. China already has a great wall, so they aren't exactly paniced about the threat.

Eventually, the UN forces pull out of Russia, and attempt to save as many Russian refugees as they do. The polar bears quickly storm the capital, and the world watches in astonishment as they discover that the polar bears have learned how to use firearms and have gained sentience. The polar bears initially expect little opposition as they take the capital, because all the Russian civilians have been evacuated. However, they were quickly met with suprise as Vladamir Putin, who stayed behind during the evacuation, quickly proceeded to fight off the polar bears with his bear fists (get it, BEAR fists?). He managed to kill off three fourths of the invading polar bears before he was finally detained and frozen in carbonite by the bears. The polar bears quickly set up a new communist government and enstate the New United Soviet Socialist Republic (or N.U.S.S.R.), The world breathes a collective sigh of frustration, because the fact that the soviets are back, and also are polar bears, sucks alot. 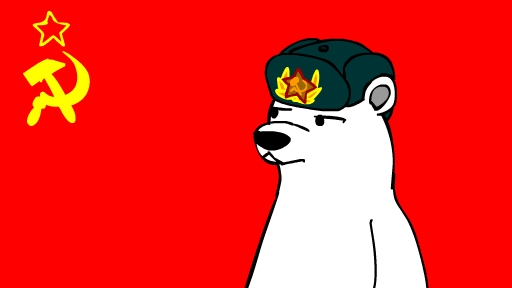 Fortunately for pretty much everyone in Europe and Asia, the N.U.S.S.E.R. has no interest in expanding its territory, as the bears seem satisfied with Russia (it is, after all, the biggest country on the planet). However, as a result of the return of those darn soviet commies, a new cold war is sparked between both those darn' commies, and good ol' 'Amurica. Pretty much everybody everywhere (except for in Switzerlan, of course) makes a REALLY big deal about "Cold War II", but it isn't really something to worry too much about. After all, it's more of an international political staring contest than a war, so no one panics all that much. It's just really annoying is all. "Cold War II" (as it has come to be known as) drags on for another four years, and people slowley forget that it was even actually happening, because as stated earlier, it was basically just a massive staring contest. Some issues begin to arise worldwide, however; Eventually, many animals begin to get word of the nation of polar bears which has arisen from the ashes of not-communist Russia.

Without warning, simmaler animal uprisings began springing up world-wide. Heards of moose form a union in Canada and attempt to start a coup d'é·tat, however, those Canadians (being Canadian) and those moose (being moose) decided to just not worry about it and the moose just sorta co-ruled Canada, and no one was really bothered by it. Unforunately, the same can't be said for Austrailia. Dingoes and Emus. EVERYWHERE. They managed to overrun half the continent before the Aussies finally managed to push them back with their machetes' and boomarangs. Thankfully, when the kangaroos realized that dingoes and emus ruling the land down under would have caused mass histaria, they quickly joined the Australians in the fight against the dingo/emu horde. Inspired by the kangaroos, the legion of poisonous spiders/snakes/pretty much everything in Australia also joined in the fight. The emus and dingoes were quickly defeated, leaving only a handfull of scattered rebel sects. Japan, meanwhile, saw "the Panda Uprising", in which pandas attempted to take over the government, but Japans legion of well-trained samurais fended them off, leaving the pandas even more endangered than before. Meanwhile, theroughout South America, sloths began ther own revolution... I think it's still going on at this point, but, i mean, the sloths are REALLY slow. No, like, REEEEALLY SLOW.

The United States of America, however, saw the most chaos in these troubled times. (on an unrelated note, it's worth mentioning that the animals in Switzerland chose to stay out of it, because, afterall, switzerland). Unlike the majority of the coup d'é·tats around the world, the animals in America were much less organized, so there were basically like, 30 or 40 uprisings happeneing all at one time. So yeah, it kinda sucked alot. Amongst the worst and most distructive of the revolutions was the "Buffalo Revolt of Oregon", the "Eagle Uprising of D.C." and the "Trout Wars of the California Bay", just to name a few. Most of the more southern states were more prepared, since those ones are mostly full of rednecks who, as we all know, have WAY too many guns. When the governing bodies of Texas saw that the country was collapsing under the pressure of numerous uprisings, along with the second cold war (which most people forgot about up till this point, anyway), they swiftly made the descision to succeed from the union (because Texas is allowed to do that. No, really, look it up, they can do that whenever they feel like it).

Eventually, the states of Arizona and California saw how good Texas was doing, and seeing as the U.S. government had grown to be dangerously unstable, they both succeeded from the union as well, forming the country of Arifornia. A civil war quickly broke out as the U.S. attempted to take back the territory held within Arifornia. Arifornia, however, had gained great respect from Texas (now officially called the New Republic of Texas, but pretty much everyone still calls it "Texas"), and quickly joined together in the fight. The civil war dragged on and on for a large number of years. Meanwhile, back in Russia, the N.U.S.S.R. was taking advantage of the U.S.'s instability, and they quickly gave the "Annex Pact of the New Soviet Union", a document stating that any European or Asian country which refused to join the N.U.S.S.R. would become an enemy and take their country by force. The polar bears didn't do this because they wanted to expand their country, they simply wished to have a tactical advantage over the states in the event that the Second Cold War were to escalate.

Most countries, already instable and weak from the uprisings, joined the Soviets out of fear for their own country. The only countries which did not join were China, Japan, Poland, Finnland, the UK, and Switzerland. The polar bears decided to let Switzerland off the hook, because they were switzerland, however, they did not hesitate to declare war on the remaining countries. The countries that were pitted against the now MASSIVE New Soviet Union formed an alliance, which came to be known as "the Birmingham Alliance", because the alliance was made official at a meeting in the city of Birmingham. They would've asked 'Murica and Australia to help them out, but decided now was a bad time since 'Murica was dealing with its own problems at the moment, and Australia was still trying to supress the remaining Emu and Dingo rebels; Canada, on the other hand, was happy to help. The Soviets managed to overtake half of Finnland and 2/3s of China within the first 3 years of the war.

Meanwhile, a strange anomaly was being noticed around the world; penguins began marching in droves from all over the northern hemisphere to Switzerland.

Well, I just heard the microwave go off, so i better go get my hot pocket. I'm going to write about the rest of our impending doom later, so check back later, so you will be able to prepare for the impending apocalypse. okay, byeeeeee!

here's an arbitrary home button, because, you know, it's not like your web browser has a back button or anything.